The Constituent Charters of Belarus of 1918 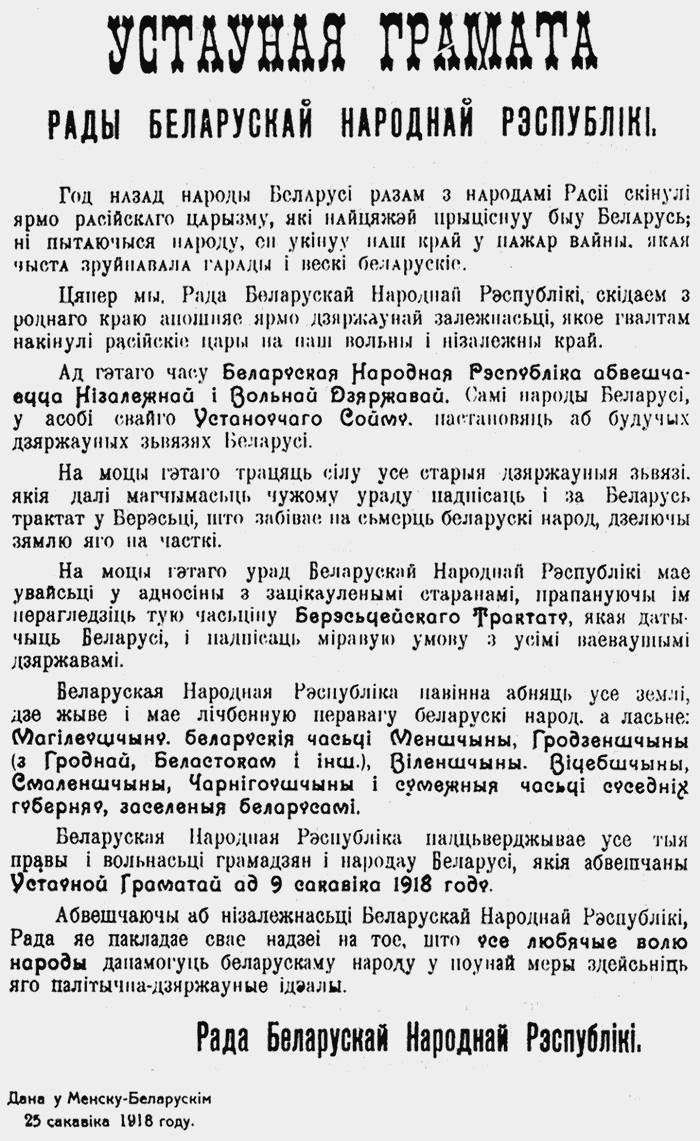 The three Constituent Charters issued by the Rada BNR in February and March of 1918 have declared Belarus an independent democratic state. This has been the reestablishment of a sovereign Belarusian state after more than 100 years of Russian rule.

Our native land has found itself in a new and difficult situation. The fate of the regime that was here previously is not known. We face the possible occupation of our land by German troops.

We must take our fate into our own hands. The Belarusan people must assert their right to full self-determination, and the national minorities their right to national and personal autonomy.

The rights of nation should find realization by means of a Constituent Assembly convened on democratic principles.

However, even before convening the Constituent Assembly, all power in Belarus should belong to the peoples residing therein.

The Executive Committee of the Council (Rada) of the First All Belarusan Congress, supplemented by representatives of the revolutionary democracy of the national minorities and fulfilling the goals imposed upon it by the Congress, declares itself to be the Provisional Authority in Belarus to govern the land and to convene as soon as possible an All-Belarusan Constituent Assembly based on universal voting rights for the entire adult population without distinction of nationality, religion, or sex.

The Provisional National Authority in the land, having assumed the tasks of defending and strengthening the revolutionary achievements, will carry out these tasks through the National Secretariat of Belarus, which has been established and which, from this date on, has assumed the exercise of its responsibilities. The names of the members of the Secretariat will be published later.

The Executive Committee of the Council of the First All-Belarusan Congress
Given in Miensk, Belarus, February 21 (8), 1918.

During this World War in which some powerful states have been destroyed and others liberated, Belarus has awakened to national life. After three and a half centuries of subjugation, the Belarusan nation again declares to the entire world that it is alive and will remain alive. The Great National Assembly the All-Belarusan Congress of December 5-17, 1917, concerned about the fate of Belarus, confirmed a republican government within its territory. Carrying out the will of the Congress and defending the national rights of the people, the Executive Committee of the Council (Rada) of the Congress, decrees the following concerning the political structure of Belarus and the rights and freedoms of her citizens and peoples:

Proclaiming all these rights and freedoms for the citizens and peoples of the Belarusan Democratic Republic, we, the Executive Committee of the Council of the Congress pledge to guard the legal order of life in the Republic, ensure the interests of all the citizens and peoples of the Republic, and preserve the rights and freedoms of the working people. We shall also apply all oui, strength to convene the Constituent Assembly of Byelorussia in the very near future.

We call on all faithful sons of the Belarusan land to assist us in our difficult and responsible labors.

The Executive Committee of the Council of the First All-Belarusan Congress
Given in Miensk, Belarus, March 9, 1918.

A year ago the peoples of Belarus, together with the peoples of Russia, threw off the yoke of Russian tsarism, which had oppressed Belarus most of all and, without asking the people, precipitated our land into the conflagration of war which totally destroyed Belarusan cities and villages.

Now we, the Council (Rada) of the Belarusan Democratic Republic, have’cast off from our native land the last vestige of national dependence which the Russian tsars imposed by force upon our free and independent land.

From this time on, the Belarusan Democratic Republic is proclaimed an independent and free state. The peoples of Belarus themselves, under the aegis of their Constituent Assembly, shall determine the future national relations of Belarus.

By virtue of this, all former national relations lose their force relations which made it possible for a foreign government to sign the Treaty of Brest for Belarus, thus destroying the Belarusan people by partitioning their land.

By virtue of this, the government of the Belarusan Democratic Republic will establish relations with interested parties by proposing to them a review of that part of the Treaty ol Brest which concerns Belarus and the signing of peace treaties with all belligerent states.

The Belarusan Democratic Republic should include all those lands where the Belarusan people constitute a numerical majority, namely: the Mahileu region, the Belarusan parts of the regions of Miensk, Horadnia (including the cities of Horadnia, Bielastok, and others), Vilnia, Viciebsk, Smalensk, and Charnihau, as well adjacent parts of neighboring gubernias, inhabited by Belarusans.

The Belarusan Democratic Republic confirms all those rights and freedoms of the citizens and peoples of Belarus which were proclaimed by the Constituent Charter of March 9, 1918.

Proclaiming the independence of the Belarusan Democratic Republic, its Council expresses the hope that all freedom-loving peoples will assist the Belarusan people to achieve fully their political and national ideals.

The Council (Rada) of the Belarusan Democratic Republic
Given in Miensk, Belarus, on March 25, 1918.