The Case of Belarus: Presentation at the European Conscience and Communism conference, Prague, June 2008 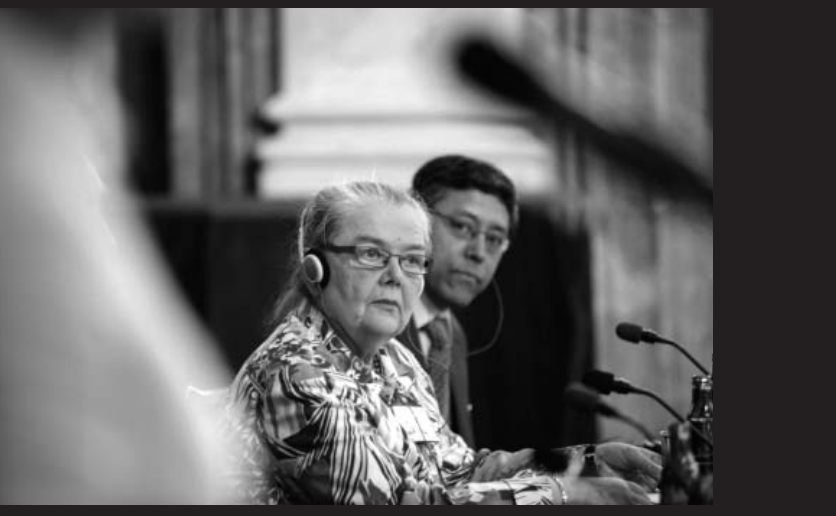 While the academic conceptualisation of the communist experience is usually articulated on a theoretical level, I would like to begin this testimony on a personal level. Because of communist aggression, I lost my homeland at the age of eight; I grew up as a refugee and have lived most of my life far from my people, from my culture, from my
extended family. I had to adapt to four new cultures before I reached the age of 12. At the age of three, I was deprived of the presence of my father while he was in Soviet jail. My grandfather died while being deported to Siberia. My only sister died at the age of 18 months as a consequence of the ordeal my family went through while fleeing the Soviets.

I am one of the six million Belarusians whose life has been altered or destroyed by what we still call communism, but what in fact is a deficient ideology which has become a powerful tool in the hands of a corrupt and amoral neighbouring empire. Three generations of Belarusians have been victimised by the communist ideology used to brainwash or terrorise a nation into submission. The effects of this process are an exacerbated survival instinct that continues to deprive the people of Belarus of the most basic of human rights – freedom.

The forced collectivisation, from the end of the 1920s to the beginning of the 1950s, affected the totality of the Belarusian rural community and resulted in 350,000 deaths (Zaprudnik, 1998). Mass murder, as evidenced by the mass graves of Kurapaty near Minsk, uncovered 20 years ago by Zianon Pazniak, who is going to present a paper later today, and the many other mass graves in Belarus, contain the remains of hundreds of thousands of innocent Belarusians who died as a result of Stalinist purges between 1937 and 1941. One in every four Belarusians died as a result of World War II, which was partly fought on Belarusian territory. Both German Nazis and Soviet Russia must be held responsible for this slaughter.

The post-war purges in Belarus and the deportation of hundreds of thousands of Belarusians to Siberia up until the end of the 1960s are another chapter of the history of Soviet Belarus. The way the authorities have dealt with the Chernobyl catastrophe is another example of the inhuman genocidal policies of the Soviet regime. In 1950, my predecessor, Mikola Abramtchik, published his famous “I accuse the Kremlin of genocide of my nation”. The concept of “captive nations” has come to be widely used. It was clear to all of us that the perpetrators of the new wave of crimes against humanity were the rulers in the Kremlin. Communist ideology had become a marketing tool used to extend Russia’s rule to as many hotspots in the world as possible. Little did we, the Belarusian diaspora, know up to the very end of the 1980s that Moscow had completed its cynical task of brainwashing the people of Belarus into believing that Russia was in fact the benevolent “big brother” without whom they had no chance to survive. The Russian-speaking homo sovieticus was born.

The second category of the Kremlin’s crimes against the people of Belarus was intended not only to subjugate but to erase from the maps of the world the very existence of the country of Belarus and of the nation which had lived on its territory for a thousand years. The first offence in that category was the aggression and destruction of the Belarusian Democratic Republic in 1918 and the division of Belarus by the Treaty of Riga. The territory of the Belarusian Socialist Soviet Republic, which was created to replace the independent Belarusian Democratic Republic, was reduced to a fraction of the ethnic territory of Belarus. I would count in this category the extermination of Belarusian writers, artists, politicians and the vast majority of the national intelligentsia which lasted from the end of the 1920s to the end of the 1930s. According to historian Jan Zaprudnik, “Of the 238 writers arrested during the years of repression, only about 20 survived. The Belarusian Academy of Sciences lost ‘nearly 90 percent’ of its members.” (Zaprudnik, 1993).

Our historical memory and the Belarusian language – the very foundation of our national identity – were for most of the 20th century and still are the victims of the Soviet imperial policies and of their most loyal present-day disciple, Alexander Lukashenka. I would like to mention that in 1990, there was not a single Belarusian school in the capital of Belarus, Minsk. Our churches were blown up, our material heritage has been destroyed not only by war, but through political mandate, because is was material proof of the long existence of a highly civilised European country. Belarusian history runs in the face of Soviet attempts to suggest that nothing of value had existed in the land before 1919.

The most serious threat to the existence of Belarus, however, still is Moscow’s desire to make it a province of the Russian Federation, whose goals are surprisingly similar to those of the Soviet Empire. This was clearly stated by Mr Putin in August 2002. The second most serious threat to the existence of our nation has been the damage which communist propaganda, fed to our people for close to a century, has done to their self-perception, critical thinking and sense of place. It will take many generations to normalise the right to explore, to feel pride, to simply be after such a deeply scarring colonial experience.

You may have noticed that for me as a Belarusian, communism is closely linked to our eastern neighbour using communist ideology as a tool to achieve its expansionist goals. But communism has affected the lives not only of people who have been ruled by its adepts in the Soviet Union. This has also been the case of millions of people who have been affected by the actions of communist sympathisers in the world who, as President Havel said it, have often unknowingly been helping delinquent regimes to continue perpetrating crimes against humanity and who are at this time helping the Russian Empire to regain its strength.

After our family escaped the Soviet Empire, my father considered it his mission to explain to anybody he met and mainly to the French intellectuels de gauche – we lived in France at that time – what living under communism meant. At my father’s funeral, a good friend told me that he realised my father was telling the truth only after the Soviets invaded Czechoslovakia in 1968… For 20 years this friend, who was a lawyer and had every chance to verify the facts, was obviously not able to admit that he was wrong. This is probably also why there are still people in Belarus who readily believe the propaganda of the present regime.

We rarely learn from the mistakes of the past. I hope, however, that the time will come when the Soviet lesson will be learned by the thinking portion of humanity.

Studied Art at the Parisian École Nationale Supérieure des Beaux Arts and is a graduate of the Sorbonne (1959). Since 1969, she has been living in Ottawa, working for the government and also engaged in Belarusian civic, scholarly and artistic activities. Founded and headed (1989–1997) the Canadian Relief Fund for Chernobyl Victims in Belarus. In 1997, elected President of the Rada of the Belarusian Democratic Republic in Exile.